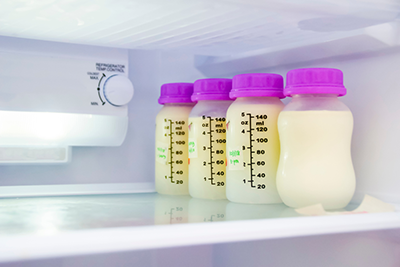 Despite significant efforts to prevent mix-ups, occasionally, expressed breast milk from a mother is given to another mother's child in error. If a child is mistakenly fed another child's bottle of expressed breast milk, such as in a childcare setting, sensitivity should be taken with both families to minimize fear and steps should be taken to appropriately manage the situation in a timely manner.

Few illnesses are transmitted via breast milk, and in fact, the unique properties of breast milk help protect infants from colds and other typical childhood viruses. Nonetheless, both families need to be notified when there is a milk mix-up, and they should be informed that the risk of transmission of infectious diseases via breast milk is small.

When a milk mix-up occurs, any decisions about medical management and diagnostic testing of the infant who received another mother's milk should be based on the details of the individual situation and be determined collaboratively between the infant's physician and parent(s) or guardian(s).

Routine prenatal care in the United States includes laboratory testing for sexually transmitted infections (STIs) and HIV. Most HIV-positive women are identified prior to or during their maternity hospital stay. In the United States, women who are HIV-positive are advised NOT to breastfeed their infants. As such, it is unlikely that a mother living with HIV would be providing expressed milk for her own child at a child care center. In addition, the risk of mother-to-child transmission for whom a single bottle of another mother's milk was fed is very low. The CDC is unaware of any evidence of transmission of HIV to a child via single exposure to another mother's milk.

Concerns about potential exposure to hepatitis B and C viruses

Hepatitis B and C cannot be spread from a woman to a child through breastfeeding or close contact unless there is exposure to blood. It is very unlikely that a child would be at risk for hepatitis B or C by receiving another mother's breast milk. Furthermore, with regard to hepatitis B (there is no vaccine for hepatitis C), most infants have already received at least one dose of the hepatitis B vaccine shortly after birth, the second dose between one to two months of age, and the third dose between six to 18 months of age. However, infants who have no been vaccinated, or infants whose vaccine schedule was interrupted, should be vaccinated according to the Advisory Committee on Immunization Practices' hepatitis B vaccine recommendations as soon as possible.

There is no evidence that breastfeeding spreads hepatitis C virus.

Concerns about potential exposure to medications

Although many medications do pass into breast milk, most have little or no effect on infant well-being. Few medications are contraindicated while breastfeeding and risk of adverse effects from a single exposure to a medication through breast milk is very low.

To help prevent milk mix-ups, childcare facilities should review and update their policies and practices for storing and handling breast milk, as well as training (or retraining) all childcare facility staff in safe storage and handling of breast milk. In addition to clearly labeling expressed breast milk with the child's name, some facilities use strategies such as putting different colored rubber bands around the bottles for different infants and using separate bins for each infants bottles of milk.