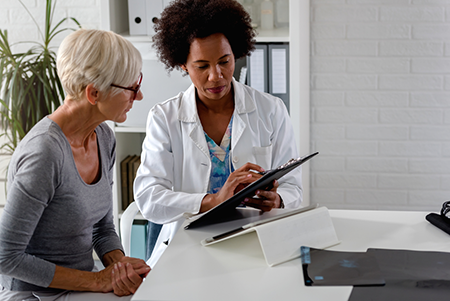 Bleeding after menopause? Why you should call your OB GYN.

Once you've officially reached menopause - a full year of no periods - any amount of vaginal bleeding isn't normal. If you notice light spotting or heavy, period-like bleeding after menopause, several health conditions might be the cause.

While most postmenopausal bleeding cases aren't caused by cancer, this type of bleeding is a common symptom of endometrial cancer. So you should call your OB GYN and get checked. Here are some of the most common causes of bleeding after menopause and how your OB GYN can help.

If you have bleeding after sex or along with painful intercourse, thinning of the vaginal tissue can be to blame. Many women experience vaginal dryness and thinning due to the decrease of estrogen during menopause. The North American Menopause Society says this can eventually cause inflammation, tearing, and bleeding if left untreated.

If you're having issues with vaginal thinning, your OB GYN may talk to you about prescription or over-the-counter options to help. You may try lubricants, low-dose vaginal creams or rings, or other hormone therapies.

If your OB GYN finds endometrial hyperplasia, he or she can recommend treatment based on your specific type. Some women may only need medication or monitoring, while others may choose a hysterectomy if their condition is abnormal or complex.

Uterine polyps, also called endometrial polyps, are soft growths that happen in the lining of your uterus. You can have multiple polyps, and they can vary in size. Polyps are a common cause of irregular bleeding during perimenopause and menopause.

Most of the time, uterine polyps are benign, meaning they aren't cancerous. However, the U.S. National Library of Medicine says there is a small risk of cancer. As a result, your OB GYN may recommend you have them removed.

The National Cancer Institute says about 9% of women who visit their doctor for bleeding after menopause are diagnosed with endometrial cancer. This type of cancer starts in the lining of your uterus.

The early stages of endometrial cancer may cause no symptoms. But irregular bleeding, such as bleeding after menopause, is often one of the main signs. Like other cancers, the sooner you catch endometrial cancer, the better the outcomes.

What to expect at your visit

If you visit your OB GYN with postmenopausal bleeding, he or she can talk to you about your symptoms and medical history and perform additional tests. You'll likely start with a pelvic exam. Then, the American College of Obstetricians and Gynecologists says your OB GYN may use a pelvic ultrasound, hysteroscopy, or biopsy to get more information.

Once the cause of your postmenopausal bleeding is known, it can be monitored and treated. The majority of the time, your OB GYN will find a noncancerous reason for your bleeding and help you get the care you need to stop it from happening again.