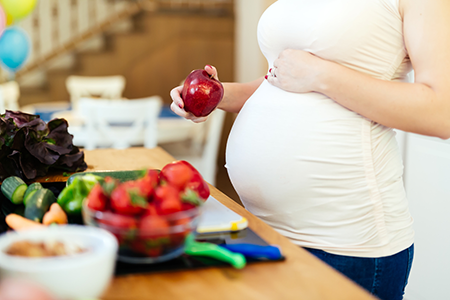 One way to protect your baby’s health during pregnancy is to avoid or reduce certain foods or drinks in your diet. Some foods or beverages are more likely to carry bacteria or parasites. Others—like alcohol—have been proven to cause potentially serious health concerns in your child.

It may seem like there are a lot of foods you can’t enjoy. But, in general, you still have a variety of food choices when you’re expecting. Here are some of the foods and drinks your OB GYN may recommend you limit or avoid during pregnancy.

Some types of fish are a great choice when you’re pregnant. Common fish like salmon, freshwater trout, or herring can provide essential nutrients for you and your baby, including omega-3 fatty acids. However, other types of fish should be limited when you’re expecting.

Meats, seafood, and eggs that are raw or aren’t fully cooked may put you at risk for bacteria or parasites. For example, undercooked or raw meat, poultry, and eggs can carry the bacteria salmonella, a common cause of food poisoning. Other raw meats may carry a parasite that can cause a serious infection called toxoplasmosis.

Some common foods to avoid include sushi made with raw seafood. Cooked seafood or vegetarian sushi is typically fine. Anything with raw eggs should be avoided as well, such as dough or batter and certain sauces or dressings. Be careful with unwashed, raw fruits and veggies too—especially pre-packaged salads or other pre-cut, raw items. Fruits and vegetables are an important part of your diet, but make sure you wash them thoroughly first.

The effects of alcohol on a developing fetus have been well-studied. And there’s no amount of alcohol that’s considered safe during pregnancy. Because alcohol can pass from your bloodstream into the umbilical cord, it can affect your growing baby in several ways.

According to the CDC, the developmental changes caused by alcohol during pregnancy are called FASDs, or fetal alcohol spectrum disorders. There’s a wide range of potential effects. These can include physical changes in facial features, weight, and height and intellectual changes, such as learning disabilities.

The pasteurization process helps kill several types of bacteria in milk. Some of these bacteria can be especially harmful to an unborn baby. So make sure all dairy products you eat or drink during pregnancy are made with milk that’s been pasteurized.

Check the labels on soft cheeses, including feta, camembert, queso blanco, queso fresco, and brie. If they don’t indicate they were made with pasteurized milk, it’s best to avoid them. FoodSafety.gov also encourages pregnant moms to ask about the pasteurization of any cheeses or milk purchased at a local farmer’s market.

You can usually still enjoy lunch meats, hot dogs, or other deli meats while you’re expecting. However, make sure you heat them until steaming hot before you eat. This helps kill any of the bacteria listeria that may be present.

While listeriosis—the infection caused by listeria—typically won’t make you severely ill, it can cause a serious infection in your baby. And pregnant women are much more likely to get it. In fact, Reviews in Obstetrics & Gynecology says it’s approximately 20 times more common in those who are pregnant, and more than a quarter of all cases of listeriosis are in pregnant women.

Numerous studies have looked at the link between caffeine and maternal and fetal health. However, there’s still more to understand about how caffeine affects your pregnancy. The World Health Organization says that some evidence suggests high amounts of caffeine could increase risks like low birth weight.

While your OB GYN may not tell you to avoid caffeine altogether, most guidelines recommend you limit daily caffeine to around 200 mg. To stay at this level, you could enjoy one 12-ounce cup of coffee. Depending on the size, most teas and sodas containing caffeine will fall between 20 to 100 mg.

When it comes to caffeine or any other food choices, remember that your health and pregnancy are unique. If you have certain medical conditions or other complications, talk to your OB GYN about how they affect what you eat. Together, you can decide the right choices to give you the nutrition you need while staying safe.